The Next War is a tower defence real time strategy game for the Spectrum Next and all compatible clones.

It is a slow paced strategy game that can get frantic at times. Place up to 35 defence turrets on the battleground in order to defend the area from the continuous onslaught of enemy forces.

***NOTE: There is still a bug in the game that sometimes corrupts some enemy waves and displays junk for a few seconds. Help me track it down if you come across it and let me know how to reproduce it and you will get mentioned in the next update! ***

Use the Q, A and SPACE keys (or joystick) to navigate the game menus. You can select the control method, the difficulty level and redefine the keys.

Control-wise, the game supports redefinable keyboard controls, joystick and a PS2 mouse, which is the best way to enjoy it. The default keys are QAOP to move the cursor, SPACE to select and Z to cancel selection. Joysticks/joypads with two fire buttons use the second button for canceling selection, otherwise joystick users use the relevant keyboard key.

Redefined keys are saved in a KEYS.BIN file so that the game uses them automatically every time it is launched.

You can pause and unpause the game by clicking on the pause button on the lower right of the screen.

You can also switch between normal (x1) and fast (x2) speed using the speed button above the pause one!

Use  the cursor to select your defence turrets from the right panel and place them on the battle ground using the select button (or left mouse click, or joystick fire button). The selected turret with flash under the cursor if over an invalid ground position   (road or other structure). It will turn solid and surround itself with a range indicator if it is ready to be placed over a valid position. At this stage, you can abort deployment and choose a different turret by pressing the cancel selection key (or right mouse click, or joypad second button). Note that if you have a standard one button joystick, you will have to use the keyboard cancel selection key (M by default or as redefined by the user).

When ready for deployment, press again the select key (or left mouse click or joystick fire button). Once placed, it can no longer be moved, so be really cautious about your decisions! You can only sell back the turret at half the price you bought it (upgrades not included) by hovering over it, and pressing right click (or cancel key or second joypad fire) to see the price you will get and pressing again to commit to the sale.

If the funds suffice, an upgrade option is displayed in the lower right HUD area and can be activated using the fire button (or left mouse click, or joystick fire button).

The game has three difficulty levels, each one taking place in a different battlefield: a tropical jungle, a deserted military camp and a moon-like desert.

Blue turrets can fire only at ground units, the green ones are AA only, and the purple ones can attack both ground and air units and cause more damage, but they are more expensive to buy and have a longer cool-off period. The yellow turrets fire a slowdown substance at both ground and air units but do not cause any damage. They are pretty expensive but will prove valuable later in the game as the enemy units become faster. Since you can place only up to 35 turrets, you have to carefully choose which ones and where to deploy! But that is up to you to work out! Once all 35 turrets are deployed, they can only be upgraded.

Upgrading a turret extends its range (which can always be seen when hovering above it), increases its firepower and decreases its cool down interval. In the case of yellow turrets, they extend the slowdown time.

The turret selection panel on the far right displays the available turrets. If your funds are not sufficient, non-affordable turrets will be grayed out and cannot be selected.

The lower HUD displays player lives (you lose one each time a ground vehicle reaches the lower part of the screen or an air unit reaches the far right), the available cash (note that the more difficult an enemy unit is, the more cash you get for taking it down - and that also changes with each difficulty level), the current wave number, and as noted before the upgrade option and its cost (if available).

Games can be long, half an hour and more if on the easy level.

Some fun statistics are displayed on game over!

The title track "The Next War" by Desolate Plains is a specially recorded thrash metal anthem with physical organs (electric guitars, bass and drums) and played with our custom DAC code. The in-game sound effects are a mix of AY and digital sample effects. The mouse code is an adaptation of the original code provided by Tim Gilberts. The game was programmed using Z80N assembly language on the Zeus-ish assembler, and debugged using the godsend Cspect emulator. Kudos to both creators!

Awesome game.  A few suggestions for possible tweaks or a sequel... 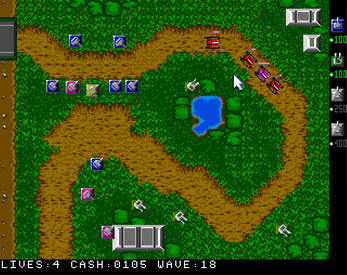 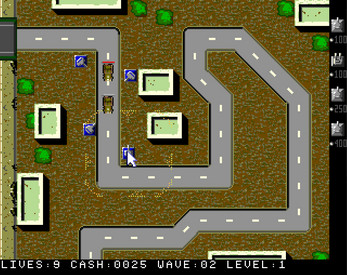 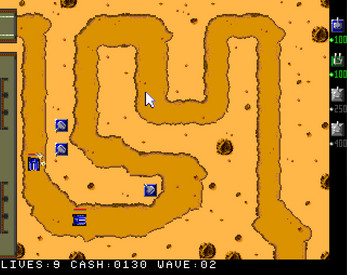 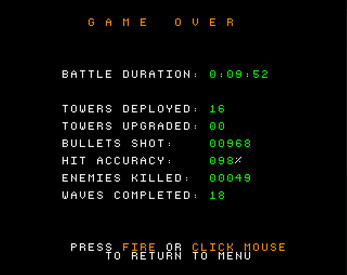